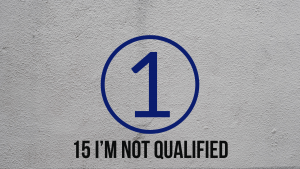 Have you ever felt like you weren’t qualified to do anything worthwhile for God? I know I have. I imagine if God required references at the point of salvation, I would be in trouble. However, God doesn’t look for the most qualified. Just look at the people He chose to be His apostles. They were a collection of fishermen, tax collectors and thieves. At one point during the beginning of the church, some of them were giving an account of what Jesus had done to some Jewish religious leaders. As they finished the leaders were astounded, “Who are these men who speak with such boldness and authority? They are ordinary and clearly have no special training.” Jesus didn’t pick the most qualified, yet look at what they were able to accomplish!

Would you like another example of not being qualified for Christian service? The apostle Paul. He was an amazing missionary, planting churches all over the region. He wrote a large portion of the new testament, yet before He began serving Jesus he had a different mission. He was a religious leader with a passion to honor God– by doing all he could to stop the followers of Jesus. He had them arrested, thrown in jail and even killed. Not my first pick to be given an important mission from Jesus. He didn’t even make my top 100. Yet, God looked at him and said, “I can use that one.”

The demoniac certainly wasn’t qualified, yet Jesus chose him too. It isn’t how we start, but what we allow God to do within us that matters. As we surrender and allow Him to lead us there is no telling what we can do.

PRAY: Lord, thank You for saving me and giving me purpose.

Acts 4:7-13 (NLT) They brought in the two disciples and demanded, “By what power, or in whose name, have you done this?”

8 Then Peter, filled with the Holy Spirit, said to them, “Rulers and elders of our people, 9 are we being questioned today because we’ve done a good deed for a crippled man? Do you want to know how he was healed? 10 Let me clearly state to all of you and to all the people of Israel that he was healed by the powerful name of Jesus Christ the Nazarene,[a] the man you crucified but whom God raised from the dead. 11 For Jesus is the one referred to in the Scriptures, where it says,

‘The stone that you builders rejected
has now become the cornerstone.’[b]

12 There is salvation in no one else! God has given no other name under heaven by which we must be saved.”

13 The members of the council were amazed when they saw the boldness of Peter and John, for they could see that they were ordinary men with no special training in the Scriptures. They also recognized them as men who had been with Jesus.

Acts 22:3-16 (NLT) Then Paul said, “I am a Jew, born in Tarsus, a city in Cilicia, and I was brought up and educated here in Jerusalem under Gamaliel. As his student, I was carefully trained in our Jewish laws and customs. I became very zealous to honor God in everything I did, just like all of you today. 4 And I persecuted the followers of the Way, hounding some to death, arresting both men and women and throwing them in prison. 5 The high priest and the whole council of elders can testify that this is so. For I received letters from them to our Jewish brothers in Damascus, authorizing me to bring the followers of the Way from there to Jerusalem, in chains, to be punished.

6 “As I was on the road, approaching Damascus about noon, a very bright light from heaven suddenly shone down around me. 7 I fell to the ground and heard a voice saying to me, ‘Saul, Saul, why are you persecuting me?’

“And the voice replied, ‘I am Jesus the Nazarene,[b] the one you are persecuting.’9 The people with me saw the light but didn’t understand the voice speaking to me.

“And the Lord told me, ‘Get up and go into Damascus, and there you will be told everything you are to do.’

11 “I was blinded by the intense light and had to be led by the hand to Damascus by my companions. 12 A man named Ananias lived there. He was a godly man, deeply devoted to the law, and well regarded by all the Jews of Damascus. 13 He came and stood beside me and said, ‘Brother Saul, regain your sight.’ And that very moment I could see him!

14 “Then he told me, ‘The God of our ancestors has chosen you to know his will and to see the Righteous One and hear him speak. 15 For you are to be his witness, telling everyone what you have seen and heard. 16 What are you waiting for? Get up and be baptized. Have your sins washed away by calling on the name of the Lord.’

Romans 5:6-8 (MSG) Christ arrives right on time to make this happen. He didn’t, and doesn’t, wait for us to get ready. He presented himself for this sacrificial death when we were far too weak and rebellious to do anything to get ourselves ready. And even if we hadn’t been so weak, we wouldn’t have known what to do anyway. We can understand someone dying for a person worth dying for, and we can understand how someone good and noble could inspire us to selfless sacrifice. But God put his love on the line for us by offering his Son in sacrificial death while we were of no use whatever to him.