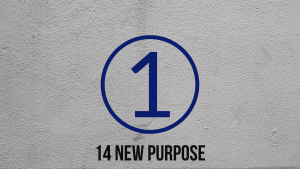 Don’t depend upon other people to find your value. There may be times people will encourage you, but often people will discourage you. You may have people in your life who tell you that you don’t matter, or you’re not good enough to do anything of significance, but remember that Jesus loves to use those who don’t matter. Just like the man in the story from the past two days. Homeless, possessed by demons, cutting himself with stones, no one was about to give him a mission of importance. Except for Jesus, who crossed a stormy sea just to speak to this man, free him from his legion and fill his life with purpose.

Jesus wants to do the same for you. He can heal the part of you that is broken. Jesus can take the part of you that you’re ashamed of and give it value, purpose, and use it to bring Himself glory. Jesus instructed the man to tell everyone what he had experienced. “Tell everyone that you had been controlled by demons and how I set you free.” I’ll be honest, I’m not sure I’d sign up for that assignment. I’m not sure I would want everyone to know about my demon-filled passed, however, it is in our honesty, vulnerability, and humility that God begins to use us. Don’t be ashamed of your past, but instead let God redeem it.

The Bible is full of stories about people who “didn’t matter”, yet God selected them to do great things. I think of Gideon. His people were under siege and they were pretty much hiding in the hills, hoping for someone to rescue them. Gideon was hiding right there with them when an angel showed up and said, “God has chosen you to save everyone.”

Gideon disagrees, “I’m from the smallest tribe in the nation, my family is the most insignificant, and I’m the loser of my family. You’re mistaken”. Yet, it was no mistake. God used Gideon to rescue the nation.

I think of Joseph. He was a man of vision and dreams. He believed God had a future for him and told everyone about it. His brothers were jealous and offended so they set out to make sure this would never happen. They sold him as a slave to a foreign nation. While in that nation he ended up spending years in prison. However, it was from prison that God positioned him to lead that nation and rescue the whole region from starvation during a particularly rough famine.

PRAY: Father, give me faith to believe You have something planned for me today and the courage to obey You.

13 “Sir,” Gideon replied, “if the Lord is with us, why has all this happened to us? And where are all the miracles our ancestors told us about? Didn’t they say, ‘The Lord brought us up out of Egypt’? But now the Lord has abandoned us and handed us over to the Midianites.”

14 Then the Lord turned to him and said, “Go with the strength you have, and rescue Israel from the Midianites. I am sending you!”

15 “But Lord,” Gideon replied, “how can I rescue Israel? My clan is the weakest in the whole tribe of Manasseh, and I am the least in my entire family!”

16 The Lord said to him, “I will be with you. And you will destroy the Midianites as if you were fighting against one man.”

Genesis 45:1-8 (NLT) Joseph could stand it no longer. There were many people in the room, and he said to his attendants, “Out, all of you!” So he was alone with his brothers when he told them who he was. 2 Then he broke down and wept. He wept so loudly the Egyptians could hear him, and word of it quickly carried to Pharaoh’s palace.

3 “I am Joseph!” he said to his brothers. “Is my father still alive?” But his brothers were speechless! They were stunned to realize that Joseph was standing there in front of them. 4 “Please, come closer,” he said to them. So they came closer. And he said again, “I am Joseph, your brother, whom you sold into slavery in Egypt.5 But don’t be upset, and don’t be angry with yourselves for selling me to this place. It was God who sent me here ahead of you to preserve your lives. 6 This famine that has ravaged the land for two years will last five more years, and there will be neither plowing nor harvesting. 7 God has sent me ahead of you to keep you and your families alive and to preserve many survivors.[a] 8 So it was God who sent me here, not you! And he is the one who made me an adviser[b] to Pharaoh—the manager of his entire palace and the governor of all Egypt.

Genesis 50:19-20 (NLT) But Joseph replied, “Don’t be afraid of me. Am I God, that I can punish you?20 You intended to harm me, but God intended it all for good. He brought me to this position so I could save the lives of many people.