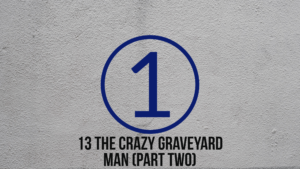 The people would regularly bind the crazy graveyard man with chains. He was dangerous. He was also stronger than he should be. With a demonic surge of strength, he would break the chains that bound him and he was once again free to wander the graveyard. This particular morning something caught his gaze. A boat approaching the dock. He began to shake with fear. The God-man had come for him.

He ran toward the docks and bowed before Jesus, the Messiah, the son of God, who had authority over all things. He knew Jesus had come to send the demons away, but they didn’t want to go. As Jesus spoke the legion of demons had enough strength to talk back, “Why have you come to interfere with us?! Please leave us alone! At the very least please don’t send us far away.”

Jesus gave them permission to go into a herd of nearby pigs, but as for this man they were done tormenting him. They went into the pigs and drove them off the side of the cliff into a watery grave. The people of the region began to gather and were angry at the loss of the pigs, but they were also afraid.

They were afraid because of the crazy graveyard man. As they approached they saw him fully clothed and talking like a sane person. They weren’t overjoyed at his freedom, they were terrified. The combination of fear and anger was enough, they began to beg Jesus to leave the region and to go back where He came from. That was fine. He had done what He came here to do.

The man who was no free begged to be able to go with Jesus. The Lord looked at Him and said, “No, your purpose is not to go with me, but return to your family. Tell them what I have done for you. Tell everyone in the ten towns you came from.” And he did. People were amazed at the name of Jesus and the power He had.

PRAY: Father, show me Your purposes for my life.

Mark 5:1-20 (NLT) So they arrived at the other side of the lake, in the region of the Gerasenes. 2 When Jesus climbed out of the boat, a man possessed by an evil spirit came out from the tombs to meet him. 3 This man lived in the burial caves and could no longer be restrained, even with a chain. 4 Whenever he was put into chains and shackles—as he often was—he snapped the chains from his wrists and smashed the shackles. No one was strong enough to subdue him. 5 Day and night he wandered among the burial caves and in the hills, howling and cutting himself with sharp stones.

6 When Jesus was still some distance away, the man saw him, ran to meet him, and bowed low before him. 7 With a shriek, he screamed, “Why are you interfering with me, Jesus, Son of the Most High God? In the name of God, I beg you, don’t torture me!” 8 For Jesus had already said to the spirit, “Come out of the man, you evil spirit.”

9 Then Jesus demanded, “What is your name?”

And he replied, “My name is Legion, because there are many of us inside this man.” 10 Then the evil spirits begged him again and again not to send them to some distant place.

11 There happened to be a large herd of pigs feeding on the hillside nearby. 12 “Send us into those pigs,” the spirits begged. “Let us enter them.”

13 So Jesus gave them permission. The evil spirits came out of the man and entered the pigs, and the entire herd of about 2,000 pigs plunged down the steep hillside into the lake and drowned in the water.

14 The herdsmen fled to the nearby town and the surrounding countryside, spreading the news as they ran. People rushed out to see what had happened. 15 A crowd soon gathered around Jesus, and they saw the man who had been possessed by the legion of demons. He was sitting there fully clothed and perfectly sane, and they were all afraid. 16 Then those who had seen what happened told the others about the demon-possessed man and the pigs. 17 And the crowd began pleading with Jesus to go away and leave them alone.

18 As Jesus was getting into the boat, the man who had been demon possessed begged to go with him. 19 But Jesus said, “No, go home to your family, and tell them everything the Lord has done for you and how merciful he has been.” 20 So the man started off to visit the Ten Towns of that region and began to proclaim the great things Jesus had done for him; and everyone was amazed at what he told them.

1 Peter 1:2-4 (NLT) God the Father knew you and chose you long ago, and his Spirit has made you holy. As a result, you have obeyed him and have been cleansed by the blood of Jesus Christ.

May God give you more and more grace and peace.

3 All praise to God, the Father of our Lord Jesus Christ. It is by his great mercy that we have been born again, because God raised Jesus Christ from the dead. Now we live with great expectation, 4 and we have a priceless inheritance—an inheritance that is kept in heaven for you, pure and undefiled, beyond the reach of change and decay.