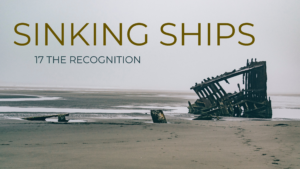 There is no more important relationship than our relationship with God. It starts by recognizing what He did for us! Do you even know how much He loves you? Everything God has ever done has been motivated by His love for you and me. There is no end to the incredible depths of His love.

Let’s think about who Jesus is. He is God. Supremely powerful, unknowing the pain of humanity. Yet, because He loves us, He stepped out of Heaven and stepped into humanity. He stepped into the hurt, the anguish, the betrayal and everything that goes along with being human. He lived a blameless life, yet He was accused of crimes He did not commit. He was spit upon, whipped, mocked, betrayed and abandoned by those closest to Him.

He died one of the most horrific and painful deaths a man could die. In doing so, He took upon Himself the punishment for sin. Not His sin, for He knew no sin. Our sin. All of it. He bore upon Himself the weight of all our sin. He Himself, felt forsaken by His Father God. Cut off because of our sin.

However, with His resurrection He defeated sin. He defeated death and in doing so, He freed us from sin’s power. We no longer suffer under the penalty of sin. Instead, we are invited into relationship with Him. Pause there for a moment. God created everything. Every person, every animal, every star, everything big and small. Yet He knows your name and invites you to spend time with Him and get to know Him. He finds great joy and delight in who you are. So much so that He decided to adopt you and call you his son our daughter.

That is a kind of love that is beyond the natural love of humanity. It isn’t anything we deserved or earned, yet He gives it to us freely, inviting us to accept Him to be a part of our lives. When we decide to enter into that relationship with Him, everything changes. It’s beautiful. While we will still walk through challenging times, we can experience, freedom, peace, and joy like we’ve ever known because we aren’t walking alone, but instead, we walk with Jesus. We carry the presence of God into every room and every situation.

PRAY: Jesus, I thank You for all you’ve done for me. For the great love you offer. I choose today to receive that love and to enter into relationship with You.

John 1:10-14 (NLT) He came into the very world he created, but the world didn’t recognize him.11 He came to his own people, and even they rejected him. 12 But to all who believed him and accepted him, he gave the right to become children of God.13 They are reborn—not with a physical birth resulting from human passion or plan, but a birth that comes from God.

14 So the Word became human and made his home among us. He was full of unfailing love and faithfulness. And we have seen his glory, the glory of the Father’s one and only Son.

Philippians 2:5-8 (NLT) You must have the same attitude that Christ Jesus had

6 Though he was God,
he did not think of equality with God
as something to cling to.
7 Instead, he gave up his divine privileges;
he took the humble position of a slave
and was born as a human being.
When he appeared in human form,
8     he humbled himself in obedience to God
and died a criminal’s death on a cross.

1 Peter 3:18 (NLT) Christ suffered for our sins once for all time. He never sinned, but he died for sinners to bring you safely home to God. He suffered physical death, but he was raised to life in the Spirit

Romans 8:1-17 (NLT)  So now there is no condemnation for those who belong to Christ Jesus. 2 And because you belong to him, the power of the life-giving Spirit has freed you from the power of sin that leads to death. 3 The law of Moses was unable to save us because of the weakness of our sinful nature. So God did what the law could not do. He sent his own Son in a body like the bodies we sinners have. And in that body God declared an end to sin’s control over us by giving his Son as a sacrifice for our sins. 4 He did this so that the just requirement of the law would be fully satisfied for us, who no longer follow our sinful nature but instead follow the Spirit.

9 But you are not controlled by your sinful nature. You are controlled by the Spirit if you have the Spirit of God living in you. (And remember that those who do not have the Spirit of Christ living in them do not belong to him at all.) 10 And Christ lives within you, so even though your body will die because of sin, the Spirit gives you life because you have been made right with God. 11 The Spirit of God, who raised Jesus from the dead, lives in you. And just as God raised Christ Jesus from the dead, he will give life to your mortal bodies by this same Spirit living within you.

12 Therefore, dear brothers and sisters, you have no obligation to do what your sinful nature urges you to do. 13 For if you live by its dictates, you will die. But if through the power of the Spirit you put to death the deeds of your sinful nature, you will live. 14 For all who are led by the Spirit of God are children of God.

15 So you have not received a spirit that makes you fearful slaves. Instead, you received God’s Spirit when he adopted you as his own children. Now we call him, “Abba, Father.” 16 For his Spirit joins with our spirit to affirm that we are God’s children. 17 And since we are his children, we are his heirs. In fact, together with Christ we are heirs of God’s glory. But if we are to share his glory, we must also share his suffering.