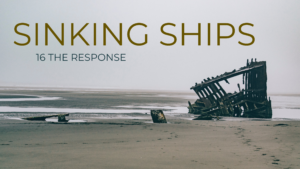 One day a banker was looking at his accounts and discovered a man who owed ten million dollars and hadn’t paid! The banker demanded to be paid, but the man said he didn’t have the money. The banker’s response was, “I will take everything you possess until you pay me back!”

The man begged, “please don’t do this. Be patient, give me time. I will pay you back, every cent.”

The banker took note of the man’s sincerity and had pity on him. He decided to cancel the debt completely and let the man go.

The man was grateful, however, he then ran into a friend who owed him a hundred dollars. He grabbed him and began to choke him, demanding, “Pay me back what you owe me, RIGHT NOW.”

His friend begged, “please don’t do this. Be patient, give me time. I will pay you back, every cent.”

The man refused to hear it and instead had his friend thrown in Jail.

The banker heard of this and was outraged.  He called the man in, “I canceled your debt when you begged me to be patient with you to pay your great debt! Shouldn’t you have had mercy on your friend who owed only a little? I showed you great mercy and you refused to do the same!” In his anger, the banker had the man thrown in prison to be tortured until he paid back everything he owed.

I didn’t make this up. Jesus told a similar story in Matthew 18 in response to Peter’s question about forgiveness. The moral here is that because God forgave us of all our sins He expects us to forgive others in the same way. We see here by the way the banker responded at the end that the way we treat others affects our relationship with God.

Of all the relationships in your life, there is one more important than any other. Your relationship with Jesus. It is my goal that we learn not only how to love people, but to LOVE God, having a strong and thriving relationship with Him. We must receive His forgiveness, but also extend that forgiveness to tohers. By seeking the Lord, we are able to learn how to love and forgive people better, however when we fail to live out of that love we create barriers between ourselves and God.

PRAY: Lord, help me to love others the way you love me.

1 John 4:20-21 (NLT)  If someone says, “I love God,” but hates a fellow believer, that person is a liar; for if we don’t love people we can see, how can we love God, whom we cannot see? 21 And he has given us this command: Those who love God must also love their fellow believers.

Matthew 18:21-35 (NLT) Then Peter came to him and asked, “Lord, how often should I forgive someone who sins against me? Seven times?”

22 “No, not seven times,” Jesus replied, “but seventy times seven!

23 “Therefore, the Kingdom of Heaven can be compared to a king who decided to bring his accounts up to date with servants who had borrowed money from him.24 In the process, one of his debtors was brought in who owed him millions of dollars. 25 He couldn’t pay, so his master ordered that he be sold—along with his wife, his children, and everything he owned—to pay the debt.

26 “But the man fell down before his master and begged him, ‘Please, be patient with me, and I will pay it all.’ 27 Then his master was filled with pity for him, and he released him and forgave his debt.

28 “But when the man left the king, he went to a fellow servant who owed him a few thousand dollars. He grabbed him by the throat and demanded instant payment.

29 “His fellow servant fell down before him and begged for a little more time. ‘Be patient with me, and I will pay it,’ he pleaded. 30 But his creditor wouldn’t wait. He had the man arrested and put in prison until the debt could be paid in full.

31 “When some of the other servants saw this, they were very upset. They went to the king and told him everything that had happened. 32 Then the king called in the man he had forgiven and said, ‘You evil servant! I forgave you that tremendous debt because you pleaded with me. 33 Shouldn’t you have mercy on your fellow servant, just as I had mercy on you?’ 34 Then the angry king sent the man to prison to be tortured until he had paid his entire debt.

35 “That’s what my heavenly Father will do to you if you refuse to forgive your brothers and sisters from your heart.”