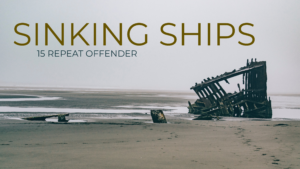 They did it again! They got under your skin. Do they have a vendetta against you? Are they trying to ruin your life? It just seems like no matter how many times you forgive them they keep offending you! How long do you have to keep forgiving them?

After Jesus finished telling the disciples how to deal with conflict, Peter had the same question! I feel like he approached it by presenting a number he thought was really high. “Lord, do I forgive them up to seven times?” I can almost sense him being proud of presenting such a high number. Cause honestly, that is a pretty big number. Most of us would struggle to forgive after the third time, let alone after SEVEN!

If this had happened today, I imagine next Peter would have texted the other disciples, “you won’t believe what Jesus just said.” Then included the mind-blown emoji.

I heard someone say recently that we should forgive because it’s easier than doing math. While I wholeheartedly agree, I did the math for you. 70 X 7 = 490. That is a high number, although, to be certain the point Jesus was trying to make was not about a set number of times before we can stop forgiving. Jesus is saying no matter what, FORGIVE.

We cannot put a limit on forgiveness, any more than Jesus puts a limit on forgiving us. Remember, Jesus laid down His life so that we might be forgiven of our offenses toward God. When we mess up again, He continues to forgive us. He then expects us to forgive the same way.

Forgiveness is incredibly important, however, I think we sometimes look at it backwards. We think forgiveness is about the person we are forgiving, but really it is about us. Forgiving gives us permission to release the pain they have caused. Someone once said that not forgiving is like drinking poison yourself and waiting for the other person to die. Another that not forgiving is like locking yourself in prison for someone else’s crime.

One last thing, as we will see in the next few days, there is also a key difference between forgiveness, healing, and reconciliation.

Matthew 18:21-22 (TPT) Later Peter approached Jesus and said, “How many times do I have to forgive my fellow believer who keeps offending me? Seven times?”

8 If we claim we have no sin, we are only fooling ourselves and not living in the truth. 9 But if we confess our sins to him, he is faithful and just to forgive us our sins and to cleanse us from all wickedness.

10 He does not punish us for all our sins;
he does not deal harshly with us, as we deserve.
11 For his unfailing love toward those who fear him
is as great as the height of the heavens above the earth.
12 He has removed our sins as far from us
as the east is from the west.
13 The Lord is like a father to his children,
tender and compassionate to those who fear him.
14 For he knows how weak we are;
he remembers we are only dust.