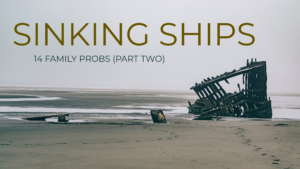 Have you ever had a moment so wonderful and so significant that you were sure it would change your life forever? Only it didn’t. David had just anointed king! Surely now his family would respect him. Everything would be different. Except it wasn’t. He was still responsible for watching the sheep while his brothers went off to fight in the war.

One day his father sends him on an errand to give his brothers some food. While there, David hears of a giant who is threatening his nation. Everyone was running scared. David starts asking questions. For those of you who don’t know the story, (spoiler alert) David goes on to kill this giant and become a national hero, however, right now no one really seems to be on his side. His brother sees him and gets angry!

“What are you doing here? Why aren’t you watching the few little sheep you’re in charge of. I know you! You’re a prideful little punk who just wants to catch a glimpse of the battle.”

His brother belittles him and accuses him of some pretty serious stuff that isn’t even true! Have you ever been falsely accused of something by someone who clearly didn’t understand you? It is in these moments that we have a choice to make. Are we going to let their words get into our minds and infect our outlook or will we recognize them as false and not give them any value?

This moment could have derailed David’s whole life. If he had gotten into a fight with his brother, or let those words become his reality then he would have likely never fought Goliath. David’s destiny could have been forfeit right there. If he had listened. But he didn’t listen. Instead, David walked away and continued searching for answers.

The voices we listen to influence us. David was destined for more than watching sheep. He wasn’t full of pride. He didn’t just want to catch a glimpse of the battle, David knew that God was being mocked and wanted to stand up for the Lord. David knew that even though everyone else was cowering in fear, he could defeat this giant. David choice to ignore the negative voice of his brother and instead remember he had been called to greater things.

PRAY: Jesus, help me to know Your voice. Help me to listen to truth that builds me up rather than the negative that tears me down. Help me to be an encouraging voice in the lives of others.

Ephesians 4:2-3 (NLT) Always be humble and gentle. Be patient with each other, making allowance for each other’s faults because of your love. 3 Make every effort to keep yourselves united in the Spirit, binding yourselves together with peace.

Ephesians 4:29 (NLT)  Don’t use foul or abusive language. Let everything you say be good and helpful, so that your words will be an encouragement to those who hear them.

1 Samuel 17:17-30 (NLT) One day Jesse said to David, “Take this basket of roasted grain and these ten loaves of bread, and carry them quickly to your brothers. 18 And give these ten cuts of cheese to their captain. See how your brothers are getting along, and bring back a report on how they are doing.” 19 David’s brothers were with Saul and the Israelite army at the valley of Elah, fighting against the Philistines.

20 So David left the sheep with another shepherd and set out early the next morning with the gifts, as Jesse had directed him. He arrived at the camp just as the Israelite army was leaving for the battlefield with shouts and battle cries.21 Soon the Israelite and Philistine forces stood facing each other, army against army. 22 David left his things with the keeper of supplies and hurried out to the ranks to greet his brothers. 23 As he was talking with them, Goliath, the Philistine champion from Gath, came out from the Philistine ranks. Then David heard him shout his usual taunt to the army of Israel.

24 As soon as the Israelite army saw him, they began to run away in fright. 25 “Have you seen the giant?” the men asked. “He comes out each day to defy Israel. The king has offered a huge reward to anyone who kills him. He will give that man one of his daughters for a wife, and the man’s entire family will be exempted from paying taxes!”

26 David asked the soldiers standing nearby, “What will a man get for killing this Philistine and ending his defiance of Israel? Who is this pagan Philistine anyway, that he is allowed to defy the armies of the living God?”

27 And these men gave David the same reply. They said, “Yes, that is the reward for killing him.”

28 But when David’s oldest brother, Eliab, heard David talking to the men, he was angry. “What are you doing around here anyway?” he demanded. “What about those few sheep you’re supposed to be taking care of? I know about your pride and deceit. You just want to see the battle!”

29 “What have I done now?” David replied. “I was only asking a question!” 30 He walked over to some others and asked them the same thing and received the same answer.