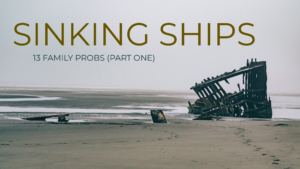 Have you noticed that we tend to hurt those closest to us most? We also tend to be hurt by those closes to us. Why? There is a certain vulnerability that comes with closeness. One of the more challenging areas to maintain peace is within our family. Sometimes it’s easy to love our family. Other times they make it very difficult.

Israel’s most famous King was a man named David. He had a close relationship with God, led Israel to many incredible victories and was promised by God to always remain on the throne, and ultimately through his family line came Jesus. However, his life didn’t start off so grand. In fact, David seemed almost like an afterthought in his family.

A prophet named Samuel had been tasked by God to anoint a new king for the nation of Israel. He went to the house of Jesse and instructed him to bring out all of his sons so he could anoint one of them to be the next king. Pretty big deal right?! Jesse follows his instructions and Samuel goes down the line, looking at each son. Some strong, handsome and likely would have made a great King, but with each son, Samuel passed by. They were not to be the King. Samuel went through every single son and finally asked, “do you have any other sons?”

Jesse replies, “Well, there’s the runt out tending the sheep.” David wasn’t even invited, there was no possibility in Jesse’s mind that his son David would be the next king. Some Biblical commentators suggest that 1 Samuel 16:11 is best translated as, “The worthless one.” It is clear David’s father did not have a high opinion of David.

Imagine growing up in that kind of environment and how it would affect you. Some of you don’t have to imagine, you can relate. You feel like you don’t matter in your home. Perhaps parents or family members even tell you as much. This is hard to overcome, but not impossible! David overcame the negativity in his family by engaging in his relationship with God. David knew God loved him and he wrote many great songs and prayers found in the book of psalms that reveal his closeness to God.

PRAY: Father, show me today how You see me. Help me to feel Your love and rest in the promise of who You are today.

1 Samuel 16:1-13 (MSG) God addressed Samuel: “So, how long are you going to mope over Saul? You know I’ve rejected him as king over Israel. Fill your flask with anointing oil and get going. I’m sending you to Jesse of Bethlehem. I’ve spotted the very king I want among his sons.”

God said, “Take a heifer with you and announce, ‘I’ve come to lead you in worship of God, with this heifer as a sacrifice.’ Make sure Jesse gets invited. I’ll let you know what to do next. I’ll point out the one you are to anoint.”

4 Samuel did what God told him. When he arrived at Bethlehem, the town fathers greeted him, but apprehensively. “Is there something wrong?”

5 “Nothing’s wrong. I’ve come to sacrifice this heifer and lead you in the worship of God. Prepare yourselves, be consecrated, and join me in worship.” He made sure Jesse and his sons were also consecrated and called to worship.

6 When they arrived, Samuel took one look at Eliab and thought, “Here he is! God’s anointed!”

7 But God told Samuel, “Looks aren’t everything. Don’t be impressed with his looks and stature. I’ve already eliminated him. God judges persons differently than humans do. Men and women look at the face; God looks into the heart.”

8 Jesse then called up Abinadab and presented him to Samuel. Samuel said, “This man isn’t God’s choice either.”

9 Next Jesse presented Shammah. Samuel said, “No, this man isn’t either.”

10 Jesse presented his seven sons to Samuel. Samuel was blunt with Jesse, “Godhasn’t chosen any of these.”

“Well, yes, there’s the runt. But he’s out tending the sheep.”

Samuel ordered Jesse, “Go get him. We’re not moving from this spot until he’s here.”

12 Jesse sent for him. He was brought in, the very picture of health—bright-eyed, good-looking.

God said, “Up on your feet! Anoint him! This is the one.”

13 Samuel took his flask of oil and anointed him, with his brothers standing around watching. The Spirit of God entered David like a rush of wind, God vitally empowering him for the rest of his life.

Psalm 139:13-18 (NLT) [A psalm of David]
You made all the delicate, inner parts of my body
and knit me together in my mother’s womb.
14 Thank you for making me so wonderfully complex!
Your workmanship is marvelous—how well I know it.
15 You watched me as I was being formed in utter seclusion,
as I was woven together in the dark of the womb.
16 You saw me before I was born.
Every day of my life was recorded in your book.
Every moment was laid out
before a single day had passed.
17 How precious are your thoughts about me, O God.
They cannot be numbered!
18 I can’t even count them;
they outnumber the grains of sand!
And when I wake up,
you are still with me!