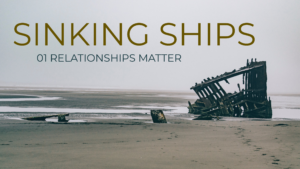 In our world, we see no end of failed friendships, broken relationships, strained families. You don’t have to look very far to see relationships sinking everyday. In your life, you have probably already experienced the loss of a friend or two.

Our world in 2019 is decidedly more connected because of the phones in our pockets, yet so often we feel more isolated and alone than ever. A recent study showed that  58% of people have less than three close friends. 13% have ZERO close friends.

So many of our students in RCC YOUTH have told me that they’ve never heard God’s voice or felt His presence. In a world of full of sinking ships is it any wonder that we struggle to have a strong relationship with God?

PRAY: Lord, I know You are here with me today. I pray that you would help me to develop stronger relationships with my friends, my family and with You.

1 John 4:19-21 (TPT) Our love for others is our grateful response to the love God first demonstrated to us. 20 Anyone can say, “I love God,” yet have hatred toward another believer. This makes him a phony, because if you don’t love a brother or sister, whom you can see, how can you truly love God, whom you can’t see? 21 For he has given us this command: whoever loves God must also demonstrate love to others.

Genesis 2:4-25 (NLT) When the Lord God made the earth and the heavens, 5 neither wild plants nor grains were growing on the earth. For the Lord God had not yet sent rain to water the earth, and there were no people to cultivate the soil. 6 Instead, springs came up from the ground and watered all the land. 7 Then the Lord God formed the man from the dust of the ground. He breathed the breath of life into the man’s nostrils, and the man became a living person.

8 Then the Lord God planted a garden in Eden in the east, and there he placed the man he had made. 9 The Lord God made all sorts of trees grow up from the ground—trees that were beautiful and that produced delicious fruit. In the middle of the garden he placed the tree of life and the tree of the knowledge of good and evil.

15 The Lord God placed the man in the Garden of Eden to tend and watch over it.16 But the Lord God warned him, “You may freely eat the fruit of every tree in the garden— 17 except the tree of the knowledge of good and evil. If you eat its fruit, you are sure to die.”

18 Then the Lord God said, “It is not good for the man to be alone. I will make a helper who is just right for him.” 19 So the Lord God formed from the ground all the wild animals and all the birds of the sky. He brought them to the man to see what he would call them, and the man chose a name for each one. 20 He gave names to all the livestock, all the birds of the sky, and all the wild animals. But still there was no helper just right for him.

21 So the Lord God caused the man to fall into a deep sleep. While the man slept, the Lord God took out one of the man’s ribs and closed up the opening. 22 Then the Lord God made a woman from the rib, and he brought her to the man.

“This one is bone from my bone,
and flesh from my flesh!
She will be called ‘woman,’
because she was taken from ‘man.’”

24 This explains why a man leaves his father and mother and is joined to his wife, and the two are united into one.

25 Now the man and his wife were both naked, but they felt no shame.